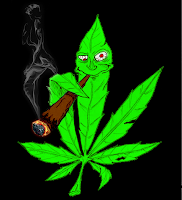 I was just wondering if it is all it's cracked up to be?

I've never tried it, yes I know I'm a wussy, but I've had severe asthma my whole life and can't even smell a cigarette without having an attack.

With that said, I would like to know if I'm missing out on something special, or is it overrated?

I know you don't have to smoke it to get baked (pun intended) from it, you could also cook with it, because it's edible, but what would one cook with it besides the ever so popular brownies, because I'm on a diet?

I'm a lightweight, I'm sure half a brownie would put me on the moon, like an unpaid power bill it would be lights out.

It can also be used for medicinal purposes like glaucoma, you get to puff, puff, pass out and feel no pain whatsoever.

I wonder if I could get it for hangnail, or maybe even an ingrown hair, do they do that kind of thing?

One of my pothead friends told me that smoking it could even make certain things more enjoyable, like food, movies and even sex, he said something about "stoned sex" and at first I thought he meant you hit your partner over the head with a stone as if you were a caveman then have your way with them...but I was wrong.

After he explained to me what it was I got kind of concerned, knowing that one of the side effects from smoking it was getting the munchies, I figured it was just a matter of time before someone was so baked that they ended up going all cannibal on their partner in the middle of doing the nasty.

Honestly from what I do know about it, and about the people who smoke it, it's no way near as bad as alcohol is.

Aside all the food being eaten I've never seen anything compared to the drama I've seen when alcohol is involved.

Relax, I'm not for the prohibition of alcohol, I just don't understand why one is legal and the other is not.

Speaking of which, I'm a total lightweight when it comes to alcohol too, the hardest thing I drink is mouth wash.

I'm not really pro one or the other, I'm just trying to find out what the big deal is, I know I'm short bus and all but I just don't get why in this country the powers that be don't want people smoking it.

Now there are people live and die by the stuff, take my aunt for example, she smokes it like a fiend, she smokes it more than Monica Lewinsky does Bill's cigar.

But you're always going to have a few screwballs making things look bad for everyone else, but this is true with anything, not just weed.

By the way, for all you weed connoisseurs out there, is dillweed pickled pot?

I know that was lame, but what do you expect from such a party pooper like myself.