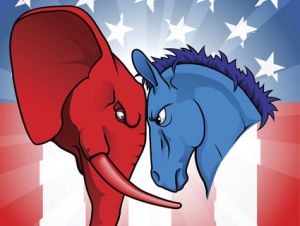 Democrats and Republicans...Washington's version of the Bloods and Crips...only in a shirt and tie. Think about it...both groups use colors to represent their respective hoods and group affiliation (red and blue), both groups scare people into joining them and both groups kill those who oppose them.
Also, just like the Bloods and Crips...Democrats and Republicans are out for themselves and no one else...if you're not with them, then you're against them...to believe otherwise is foolish.

Who do you think controls the illegal drug trade, the arms distribution and just about all the other crime in their respective areas...think about it.

They keep us fighting amongst ourselves and at odds with our neighbors...the more chaotic our lives are and the more we feel as if it's us against them...the less likely it is that we will come together as a cohesive unit and rise up against this corruption...and government.
There's a political turf war going on people...and we're caught in the crossfire...open your eyes and smarten up...duck and cover some beaches.
O.G. baby...original government!
MJM
Posted by Michael J Mele at 8:01 PM