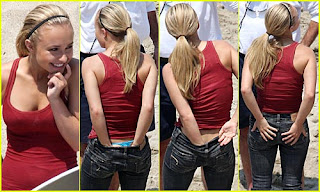 Why is it considered nasty when you pull a wedgie out in public, if there's mail in the box you have to get it out?

Just like pooping, we all do it, of course some more than others and some at the most inopportune times, but the bottom line is we all unwedge our wedgies.

As long as you're not running for president and going around shaking every one's hand after you dislodge the cotton, then what's the problem?

Not only that, but the longer it stays up in there, the bigger the risk is that it'll come out with bacon strips and/or skid marks on it...and who in their right mind wants that.

Speaking of wedgies, I really don't understand how people can wear thongs, at least willingly anyways.

I could see if Guantanamo Bay used them as a means of torture, possibly to coincide with waterboarding, but to purposely stick something up your kiester makes no sense to me at all.

I can't take a healthy dump without wincing in pain, so I couldn't imagine intentionally trying to get something up there all with the hopes of making my ass look good for the benefit of the people behind me.

The bitches behind me aren't that important, because if they were they would be next to me and not bringing up the rear, not hating, just saying. 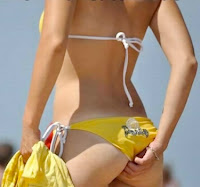 I know that thongs and/or g-strings don't actually go up in the puckered brown starfish, down the dirt road, up the hershey highway, etc, but it comes pretty close and that's what makes me feel uneasy.

Mine is an exit only, and just like those exit doors with the alarms that sound when they are opened, mine will do the same if anything tries to go in...just FYI.

For gosh darn sakes (sorry for the offensive language), kids in school give other kids wedgies as a way to humiliate and bully them, so why we do it purposely to ourselves when we get older boggles my mind.

Forget banning dodgeball from the schools, ban the wedgie!

That's why I'm thankful I'm not gay, not that there's anything wrong with that, but truthfully I would have to be celibate if I was, that or strictly stick to Ben and Jerry's...if you know what I mean.