“Stop, Drop and Hop or Come in and Stay a While?” 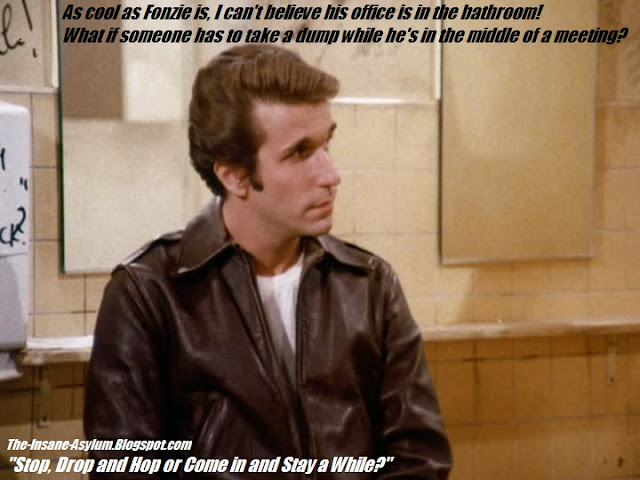 There are two kinds of people when it comes to using the crapper, and I’m not talking about the public one here, because hopefully no one uses those cesspools unless absolutely necessary. I’m talking about your own personal porcelain potty.

You have the individuals who are in and out with a quickness like Superman in a phone booth at the first sign of trouble, then you have those who set up shop and make it a home away from home within a home. I myself am the latter, and damn proud of it.

Now some may scratch their heads in confusion and ask why one would purposely stay firmly planted on the pot while being surrounded by their own stank, unless of course they were having tummy troubles and/or a professional masturbator. Well my reason is simple; I prefer to deal with the shit that’s inside the door instead of the shit that’s on the other side of the door. By that I don’t mean that I have a poorly trained pet that leaves turd nuggets all over my house like landmines, but rather people who are so annoying they could make Jesus (and I don’t mean the gardener) ask for a do-over on that whole dying on the cross for our sins thingy.

You want to be a super pooper like me? Well listen closely because I’m about to tell you how it’s done.

There are secrets to surviving the dreaded gas chamber. Certain things one could do to make the overall experience really not all that bad, believe it or not, actually rather pleasant. Some of these steps may take time to master, but trust me in the end it’ll be completely worth it and you’ll be a much happier person in the long run as a result of it.

Here’s the first step, and this may not be all that easy for those of you with pancake asses, but for the the rest of you who are fortunate enough to have junk in your trunk this’ll be no problem whatsoever. Plug the hole! Don’t get it twisted; the hole I’m talking about plugging here is not the one to your backdoor, but the one to the seat of the bowl you’re doing your business on.

This may require some wobbling as if you were a Weeble and/or possibly even some tushy touching, so make sure to keep some Purell readily available just in case. Wedge those buns in there tightly, like you were stuffing a Thanksgiving turkey. That septic stream should see nothing more than the dark side of your moon.

Why do this you may ask? The answer is simple; it’s to avoid any raunchiness from escaping the bowl. That way regardless of how long you plan on visiting, you can do so without aggravating your nostrils and/or taste buds if you happen to be one of those extremely ripe bitches where your aroma is so thick you could taste is.

As a backup, hanging a car air freshener from the doorknob will definitely help in the case of a ventilation emergency. Sure it won’t mask the whole smell, but a mixture of pine trees or new car and crap is still better than just plain old crap, just saying. 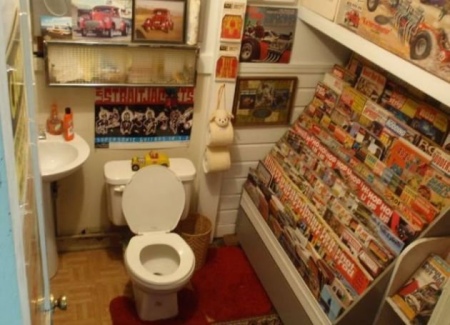 Step number two, which coincidentally involves taking a number two, funny how that worked out.

Don’t be too quick to flush your friend. The reason being of course is because most people associate the flush with the last step in the pooping process, and if you’re not out the door shortly after they come banging like they were the police. Let your new buddy hang around for a bit. Let him enjoy his freedom from the bowels before being washed away to his eternal resting place.

Nothing makes others feel the need to use the bathroom more then the sound of that door closing. I believe it’s a mental thing, that or a pain in the ass thing, and I’m not taking about hemorrhoids. They’re as fine as can be without a care in the world, completely void of any bladder and/or anus waste, at least until they notice the threshold to the toilet blocked off.

That’s why saving the flush for the final act, and not a second before, is imperative and not to be passed over. Doing so will help you avoid any unnecessary headaches while you’re trying to relax.

The last step, which is just as important as the previous two and should not to be taken lightly, is to bring a lunch or at least a snack in with you. You’re going to be away from the outside world for quite some time, and you wouldn’t want to pass out from hunger and end up face down, ass up on the bathroom floor. Been there, done that, and it wasn’t a pretty picture.

I would also highly recommend carrying prepackage noms here, because you wouldn’t want poop particles on your food, ummm grodie to say the least.

Aside from edibles, bring in things to keep you occupied while you’re lavatory lounging. Here are some suggestions. Maybe take up needlepoint, start playing a portable gaming system and/or if you’re so inclined, bring in that car engine that you’ve been rebuilding.

There’s nothing like reading a good book on the toilet, and if you’re a writer, all you need is a pen because any adequately stocked bathroom is going to have plenty of paper. What about arts and crafts, if that’s your thing feel free to get down with some finger painting, just please wash your hands when you’re done.

For the record, on cold days there is absolutely nothing wrong with brining a blanket or space heater in with you, if anything you’d be wise to let the heater run for a bit before doing your duty (huh huh) to avoid cold seat shock.

Let me put it this way, you’ll be hard-pressed to find something of mine that doesn’t have more fecal matter on it than Kanye West's teeth, but I don’t sweat it at all because there’s always soap.

Remember with great power comes great responsibility, so use these skills I taught you wisely and don’t abuse them. For example if you’re a beginner, or a young sprout with tiny little poops, then I would suggest playing it safe and not risking it. Be like SEAL Team Six, get in and out before anyone knows you’re there, making sure to bury your own stinky little brown turd (aka Bin Laden) at sea in the process, otherwise the operation would be considered an epic fail. 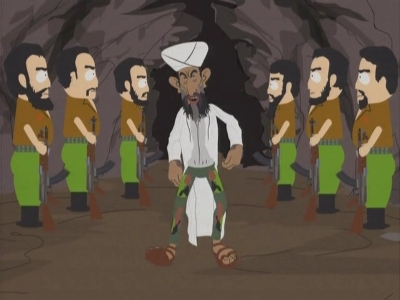 Here’s what I had to deal with, and ultimately why I say what I do.

Growing up we had many visitors who felt compelled to use their toilet time to smoke a cigarette, drink a cup of coffee and drop a deuce, so you could only imagine the funk that they left behind.

With that said, back then I was a hit it and quit it kind of fella when it came to using the facilities. I wasn’t about to let myself ferment in that toxic concoction of shit, smoke and coffee.

As time progressed, circumstances changed and I was better able to manage the shitter to shitee relationships, which allowed me slow down and enjoy my time in the inside outhouse. Give it time, you’ll get there too.

There you have it, the “How to” survival guide to making the best of a shitty situation and getting the most out of your bathroom time. They don’t call it the “rest”room for nothing.

“When the Going Gets Tough, the Tough Go Crying?” 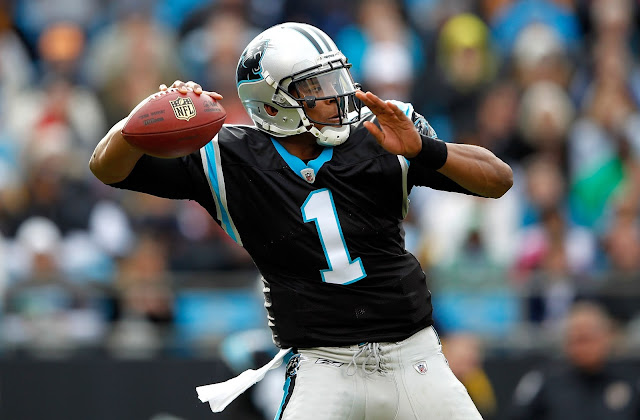 I'm sick and tired of hearing all this crap from Cam Newton! He’s trying to justify his actions in regards to how he handled things during the post-game press conference for Superbowl 50. We won’t even touch on how he was acting on the field during the big game, that’s for another time.

Showed up to interview with a chip on his shoulder and acted very unprofessional. Wouldn’t answer questions and left shortly after arriving, without even so much as a whisper as to why. After watching him storm off like a toddler who just got told he couldn’t have any ice cream, it was pretty evident as to why he did what he did.

He is an idiot, plain and simple. Obviously no one likes to lose, but trying to blame his behavior on the fact that he did just that is completely ridiculous and utterly insane. We are not talking about kids on the playground here; we are talking about pro athletes who do this for a living.

He acts as if he is only representing himself, but clearly he is not. He represents the Carolina Panthers organization and the National Football League (NFL) and gets paid extremely well to do so. Giving interviews, whether after a loss or a win, is all part of the job, don't believe me just ask Marshawn Lynch of Seattle Seahawks fame.

Now if he, and many more I suspect, would rather not give interviews then they should take a sizable pay cut and not be eligible for the captain position of their respective teams. With any job you need to earn your money and title, it’s not just handed to you because you perform one aspect of your overall responsibilities at a higher level than most. This is the case with the majority of jobs out there, and football should be no different.

He needs to grow up and act like a professional and a positive role model to all those kids who look up to him. It takes more than giving a kid the ball when you score a touchdown to make you something to write home about. I’m not trying to discount the gesture, but in all reality that’s just the tip of the iceberg.

Considering that Superman is faster than a speeding bullet, more powerful than a locomotive and able to leap tall building in a single bound, I’m sure he can survive a loss. Trust me, the Panthers will have another shot at the big game in the years to come, there’s no doubt about that. Now with that said, it’s time to be a man and stop acting like an overgrown spoiled child.

My feelings have nothing to do with the team he plays for and/or my undying allegiance to any other team, so fanboys please stand down. I believe for the money these players are paid, they should be more than happy to do what is asked of them, especially when it comes to the fans, which is absolutely who these interviews are for. I know it was the Superbowl, but there’s still no excuse for how things unfolded on his behalf.

Cam Newton…the man, the myth, the crybaby? Only time will tell.

Also, this is not a black and white thing; this is a wrong and right thing. People would still feel the same way they do towards Newton’s actions even if he happened to be white. So please stop with all that nonsense.