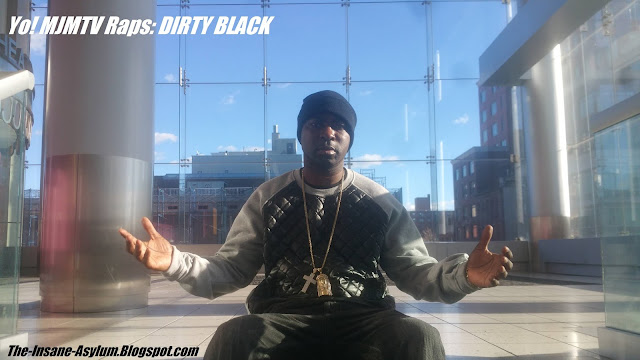 “Holy shit on a shingle, Batman”! Guess what, party people? I have a very special guest up in my crib today. The up-and-coming rapper from the Bronx, which is in NY (better recognize), has stopped by The Insane Asylum to share a little bit about himself with you. Sit back, pop open a cold one (pour some out for a dead homie if necessary), and get to know the one and only DIRTY BLACK.

1. The streets, your lady or your bitch?

DIRTY BLACK: I left the street life alone. I'm an ex-drug dealer. I would pick my lady because she would be there to hold me down, or at least I would like to think that. As far as a bitch well she would be just that, there for me to fuck when I’m ready to.

2. What would it take for you to collaborate with Vanilla Ice?

DIRTY BLACK: A music video for the song guaranteed, and of course 5-10 thousand dollars (Ice,Ice Baby)!

3. Your music, from experience or from Hollywood?

DIRTY BLACK: My music is definitely inspired by my real life experiences; there are no fabrications in my material. I don't look at Hollywood movies or the Hollywood lifestyle to motivate my song writing.

DIRTY BLACK: I think of new song ideas when I'm in the shower, new hooks, new bars, etc. Singing is out of the question; instead of waking up the dead I would probably kill the living. I won't be performing at karaoke night any time soon.

5. Where do you draw inspiration from for your music?

6. If you could have beef with any rapper out there, who would it be?

DIRTY BLACK: I would have to say Kendrick Lamar. I mean he did take a cheap shot at my city, New York, in the past. I had a diss record killing him but some of the people on my team asked me not to put it out. They were telling me from a business stand point that California is a huge market and that I need the fine people of California to support DIRTY BLACK. I didn't want them to hate me.

7. What do you think of the current state of rap music?

DIRTY BLACK: It's watered down. The rap industry needs an artist like me, a real lyrist that's not coming with that bubble gum gimmick bullshit.

8. Women, bitches and hoes or ladies and lovelies?

DIRTY BLACK: Women are very important to the world, they play a major part. Bitches and hoes are just no good. Gold diggers are always looking for a come up, groupies too, things of that nature. Ladies and lovelies are decent women who respect themselves; they don't act like bitches and hoes, so I respect them too.

9. East Coast, West Coast or somewhere in between?

DIRTY BLACK: I'm from the east coast, New York. I love the west coast, it’s beautiful out there. I do plan on moving but I'm not sure where, so right now it's up in the air as far as where I'm going to be living. 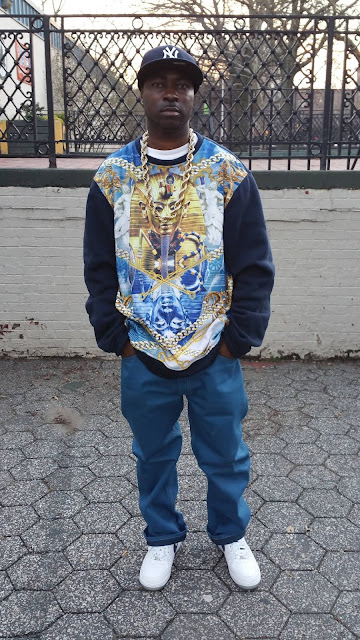 DIRTY BLACK: To everybody out there who thinks that 2PAC is alive. Please let that man R.I.P. I saw the autopsy tape with my own eyes a month after he died, the actual tape and not something that everyone saw on a documentary. A friend of mine that used to work for XXL magazine got a hold of the tape, and I watched it at his house. 2PAC's mother, Afeni Shakur said that she "cremated" him, so 2Pac is dead, unfortunately.

DIRTY BLACK: When I was younger I would have said YES, but I'm a little older now and my main focus is handling my business so NO! I'm not down with O.P.P. I'm no longer indulging in casual sex.

13. The "N word", out of place in rap music or absolutely fitting?

DIRTY BLACK: A lot of people do get offended by the "N" word, but for me and millions of people from the slums all over the world, we grew up using the word in our everyday vocabulary. It's hard to ask someone to stop using a word that they have been using for most of their life. That's why you hear it in a lot of rap music, because those artists come from those ghettos that I'm talking about. As rap artists we are kind of like ghetto news reporters, and using the "N" word is a part of the dialect that we use.

14. Do you rap for the love of the game or with the hopes of breaking the bank?

DIRTY BLACK: I would have to say a little bit of both. My music means everything to me, and yes I want to have major commercial success, what artist doesn't. I'm here to make a difference and change lives but I can't do those things without success.

15. When did you first discover your passion for rap?

DIRTY BLACK: I fell in love with rap and hip hop when my brother and his friend used to play RUN DMC, Doug E. Fresh, KRS ONE, and even before that when my pops used to play Kool & the Gang. I used to be a little kid hanging with my cousin and some of his friends in different studios. They are the ones that made me feel that I could rap. I used to just write verses, but then I started writing songs. It was hard for me because I was so used to only writing verses, so I had to make the transition.

DIRTY BLACK: My relationship with my mother is great, even though we don't see eye to eye all the time. When I was on the streets selling drugs she didn't approve, and she let me know it. She always believed in me. She didn't smoke cigarettes or use drugs. She wasn't in jail or anything like that. She was just a hard worker that believed in having something. She was always there for me and I loved that.

17. How would you classify your music?

DIRTY BLACK: My music is outstanding, it speaks for itself. My new mixtape (“THE GAME CHANGER”, coming real soon!), that will be coming out soon, sounds like an album. Sometimes I make songs from my life experiences and sometimes I make songs that people want to hear. My songs are art that everybody from every walk of life can or should be able to relate to.

18. What's your part in the overall music making process?

DIRTY BLACK: I write my own songs, I don't use songwriters or ghostwriters. I don't get down like that. If you heard me spit it you can bet your life I wrote it. I'm very picky when it comes to my beats. When I'm with a producer listening to beats sometimes I hear something that I like right away, but most of the time it's a long process. I don't make beats myself, I just write my songs.

19. Racism in America, your thoughts?

DIRTY BLACK: It's crazy that it’s 2016 and we are still dealing with racism and hate, instead of everybody trying to make this world a better place collectively. Why not try to make money with me or do something positive together instead of having hate towards me because of the color of my skin? Everything is subject to change, people need to keep that in mind.

20. Please tell us there's no Stanky Leg, Crank That or any of that other random nonsense in your future?

DIRTY BLACK: No! I'm not into making gimmicky songs. Lyrically I hold myself to a higher standard. You will hear some club bangers and some party songs, but you won't hear about DIRTY BLACK making a new dance because that's not what I do. Whoever’s out there doing that, to each their own, but I do what works for me.

21. How'd you come up with the name DIRTY BLACK?

DIRTY BLACK: A lot of people don't know this but I didn't come up with the name "DIRTY BLACK ". My cousin and one of my friends started calling me that because my nickname was "BLACK" and I used to always carry a gun. When I would run into them they would want me to chill and hang out, but I used to tell them I can't because I was dirty, meaning I was carrying a gun. So after 2 or 3 months of not hanging with me they started calling me "DIRTY BLACK ". It had nothing to do with music; hell I wasn't even doing music at the time.

That’s all she wrote…

Well there you have it, Mr. BLACK, or DIRTY BLACK if you’re nasty, letting you know exactly how it is. Make sure to show him some love and appreciation for his time here with us.

Please forgive my attempt at being street, because honestly the only thing I know about the streets comes from the one named Sesame! The only time I was ever riding dirty was when I was stuck in traffic and shit myself after a questionable lunch from the gas station.