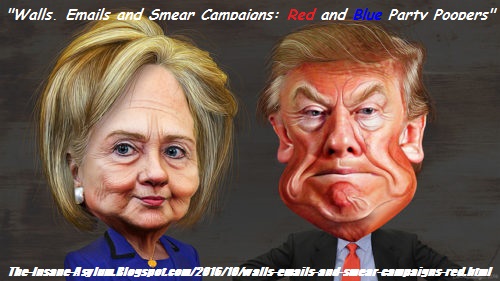 I’m about to step onto my soapbox to discuss some things I personally can’t stand, some things I feel should be changed for the betterment of all involved and some things that just drive me plain old nuts for one reason or another as far as politics are concerned.

After hearing what I have to say you may be cheering me on as if I was Rocky in the big fight of my life or you may be looking to beat the crap out of me as if I was a piñata in the home of one of those illegal Mexican rapists that you hear Trump talk about all the time, but either way try to listen to what I have to say with an open mind, with all biases aside and any absurd undying political party allegiance tucked neatly away in the back of your mental sock drawer like a baggie of marijuana.

Forget cats and dogs, this is the truth of politics…

The only thing that matters to them is money and power; they will do anything to get it, even if that means making life hell for the rest of us. 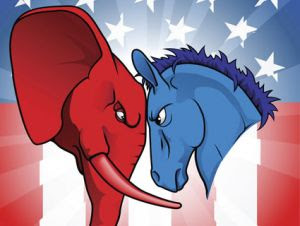 2. Democrats and Republicans are Washington's version of the Bloods and Crips, only in shirts and ties.

Think about it! Both groups use colors to represent their respective hoods and group affiliation (red and blue), both groups scare people into joining them and their cause and both groups (character) assassinate all those who oppose them. See the connection? Democrats and Republicans are only out for themselves and no one else, if you're not with them then you're against them. Don’t believe me? Then try it out and see how well things play out for you.

Who do you think controls the illegal drug trade, the arms distribution and just about any other crime in their respective areas? I’ll give you a hint; it’s not the people that the cops are watching, they are only the pawns in this game of chess we’re playing in this country.

There's a political turf war going on and we're caught in the crossfire. Open your eyes, smarten up and get ready to duck and cover mutha fuggers! Forget Juggalos, the FBI needs to classify politicians as a gang! O.G. baby…original government.

3. Remember reading comic books when you were younger? When the villain would trick the people into believing that he/she was on their side, that they only wanted the best for them, then when the time was right he/she would reveal their evil plan to take over the world and leave everyone feeling stupid for trusting him/her? Well that politics in a nutshell.

They put on an Oscar worthy performance just long enough to get them in the door of their desired office, then once inside the mask comes off and their true identity is revealed.

They keep us fighting amongst ourselves and at odds with each other because the more chaotic our lives are and the more we feel as if it's us against the world and the less likely it is that we will come together as a cohesive unit and rise up against the corruption and/or the government.

You want change; well looking to a politician for it isn’t going to help because the only change they will give you is what’s left in your piggy bank after you pay all those taxes (aka protection racket) they so pleasantly force us to pay.

4. When it comes to abortion, a bunch of men sitting around discussing and/or attempting to regulate ‪it is freaking ridiculous! They should stick to things they are familiar with, like prostate exams and having sword fights with their buddies at the urinal for example.

Stop trying to tell women how to live their lives, or in some cases due to medical concerns not live their lives, all to avoid her not having an abortion. Do you realize how crazy that is? Unless you were there for the conception then keep your self-righteous opinions and judgment to yourself. 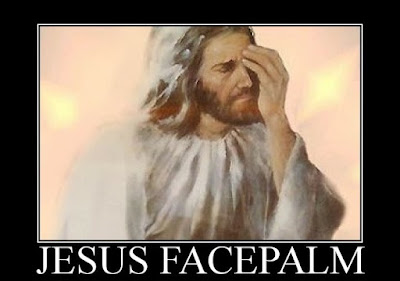 5. The separation of church and state. Keep your religion out of the office! I can only imagine the grimace on God’s face when His name is brought into all this madness.

I consider myself a Christian but God isn’t running for President, thus His feelings on the issues, as if any of these fools actually have the authority to speak for Him, don’t matter and only stand to make the candidates look like a bunch of bible thumpers who are planning on running the country in accordance to what their God believes and not what’s best for the people. We all know how dangerous that can be and if you don’t think so (like you’ve been living under a rock or something) then check out what happens to other countries around the world when religious zealots call the shots and run the show. Not such a pretty picture to say the least.

For anyone fuming over that statement and currently condemning me to hell as a result, I can guarantee you that if the religion was on the other foot, meaning that we were talking about a Muslim here, you would all be cheering me on and telling me to preach it. Such hypocrites!

6. Rock the vote and all that other crazy crap they tell us to make us believe that our vote truly matters (hanging chads anyone). Voting comes down to the lesser of two evils; basically the individual who you think would do less harm to our country than the other.

When it comes to this election one doesn’t need the Hubble Telescope to clearly see the “elephant” in the room, which is that Mr. Donald “Grab them by the pussy” Trump is not the Republicans first choice to “don” their organized-crime family, but unfortunately he is now their only choice so it’s either sink or swim with him. Regardless of his party affiliation the guy is a “jackass”, plain and simple, always have been and always will be. With that said stop acting all offended and appalled by him and his antics because we all knew what we were getting from jump, nothing all that surprising here. Now if all this came to light from someone like Mother Teresa then I would be shocked, but with him not so much.

I sometimes wonder if this whole Donald Trump thing is one of those hidden camera shows (Alright Ashton Kutcher where are you hiding?), as if he’s intentionally trying to get Hillary nominated and/or to make a mockery of the Republican Party. Maybe he’s a double agent who’s working for the Democrats? Nowadays you never know.

Donald Trump's new slogan should be, "If it ain't white, it ain't alright" and Hilary Clinton’s entrance music should be “Liar, Liar, Pants on Fire”…just saying.
You don't need to be Monica Lewinsky to see what's "cumming", which is reality television at its finest and a regular Cirque Du Stupidity. This election is such a spectacle and full of more drama than a daytime soap opera that it’s not even funny. This whole debacle is making a joke of us and our country in the eyes of the rest of the world, which is not smart and/or safe by any means.

The bottom line is this. We’re all well aware of the candidates (not including the few vote-thrower-outers on the ballot) this election, so get rid of all the nonsense  and cast your so-called precious vote for the monster who you feel will scare you the least.

I know it’s asking a lot but please try to make an informed decision as to who you vote for and not just foolishly follow behind the elephant or donkey because that will only leave you with a steaming pile of hot animal dung on your face. Honestly people who vote for a particular political party exclusively, rather than the better candidate scare the poop out of me; it’s like Ray Charles playing Follow the Leader with a sacrificial virgin who has a date with a volcano god.

7. I think all politicians should have to go over and fight with the brave men and women of our armed forces every time they choose to deploy them, that way they will think twice about fighting over the wrong thing. There will be no vacations and no playing golf while our soldiers are fighting for our country, they can spend their term on the battlefield if necessary.

You also wouldn't have to worry about their safety while they were over there with our troops either, because they would have one of the best fighting forces in the world protecting them. 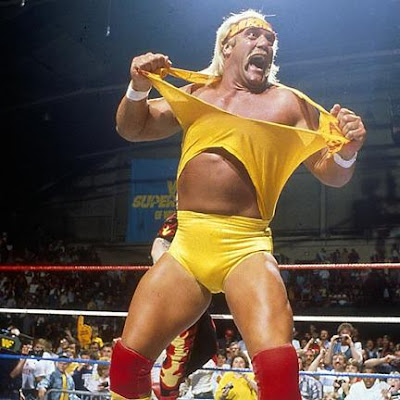 They talk more trash than a little bit about their candidate’s opponent, pretty much calling them everything but the kitchen sink. Every time I hear one I immediately picture Jimmy “The Mouth of the South” Hart and his bullhorn getting all up in someone’s face and starting shit. Let’s get ready to RUMBLE!

These people I actually find more humorous than anything else because I don’t know if they really believe the crap they are spewing through their lips or if they understand it’s all garbage and are just willing to do/say anything and everything to fight for their parties reputation and street cred, I truthfully think it’s the latter.

9. Politicians never apologize for anything, especially during their campaign trail, it's always so-and-so did it too as if that somehow justifies their misdeed and wrongdoings. Didn't we have enough of that crap as kids? Didn’t our parents tell us not to worry about what they did, and ask us if they jumped off a bridge would we jump too? So then why is it acceptable for politicians?

In the famous words of the great poet Porky Pig, “Th…th…th…that’s all folks”!

This election is like a bitter custody battle between two dysfunctional and abusive parents, no matter who wins we’re all screwed and destined to have our country grow up to be a deadbeat, a thief and just an overall piece of shit.

Now relax all you crazies with your undying political party allegiance, and know that I personally think that all, which means both Democrats and Republicans, are pieces of garbage and only out for the party they choose to align themselves with and no good whatsoever. Some might say that’s a little harsh, well I say it’s right on the money and totally justified. Maybe one day that will all change, a politician(s) will rise from the ashes like a phoenix and prove to me, and the rest of the world that they’re not all alike, but until that day comes I’m sticking to my guns and remaining and cynical as ever when it comes to these individuals.

When talking politics with some people I wonder if "thinking" is their second language. The mentality and actions of some of these mindless zombies leaves me scratching my head in utter confusion and worried about the future we are leaving for our children.

I’m Michael Mele, and I approve this message!

MJM
Posted by Michael J Mele at 8:41 PM 14 comments: Links to this post